Over the 4th of July weekend I went on a driving tour of central Oregon (Motto: "It doesn't rain here very often"). At the little town of Condon there is a very nice historical museum/complex where they have moved a number of old buildings - the old jail, a one-room schoolhouse, a barbershop - to the location of the old railroad depot. Which was bigger than you might expect, Condon was a big town in the 1850s and supplied a lot of ranchers and miners. In the depot building were some spaces set up as old rooms (a kitchen, a parlor, ...) and lots of random equipment, including a lovely old safe. This shows the exterior of the safe, but our guide apologized for not being able to show me the "very pretty" inside, because the door had been accidentally closed. And now it wouldn't open. 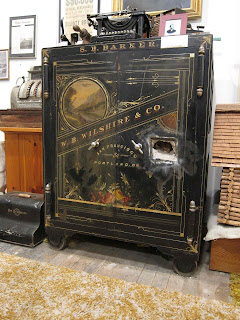 They were thinking that unlocking it should be easier because there was access to the mechanism from a hole burned in the door some time ago - "But they still didn't get into the safe then". So any safecrackers looking for a nice road trip might want to drift by Condon and find an appreciative audience.
From the decorative perspective this was a nice safe. I've not heard of the Wilshire Company, but they did a nice job on the front. It seems to be all done with aluminum bronze paint, no gold leaf, but it is a nice asymmetrical layout with good scrolls and stripes and both a landscape painting and some flowers (which spill over the stripes, giving an extra shot of depth). The "W.B.Wilshire & Co." has a split shade on the letters, I think done with a yellow glaze over the terra-cotta base color. 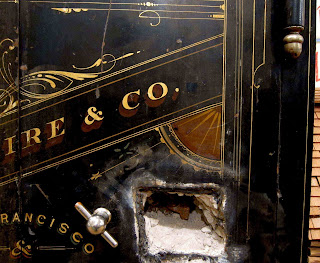 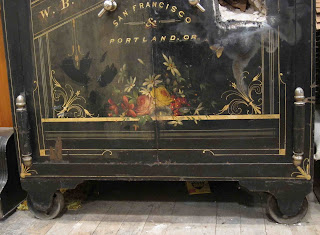 The owner's name, "S.B.Barker" was done by a different hand, probably in Portland (?) before delivery: the letters aren't as well formed (the "K" is just weird), the paint is ropy and stacked up (that may not show in the photo, but it was pretty strong in person), and the shade is on the right not the left side. But it was a professional job, he just may have had an awkward position to sit in or his paint was funky and he forgot his strainer. Note the period at the end of the name - up until about 1900 everything was considered to be a sentence, and a sentence always ends with a period. I have seen "XYZ Co." followed by a period (XYZ Co..) on old wall signs. 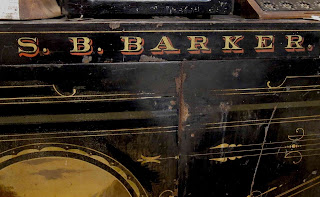 Another thing that can be seen in the close-ups (I boosted the contrast a bit) is some irregular haze/dirt that seems to follow the outer pinstripes, not so evident in the central rectangle. I'm wondering if, after they decorated the door, they put a clear varnish over the paint/stripes to protect them. Seems strange not to just clear-coat the whole thing, but hold that thought...
Because there was another building built on to the old depot, full of big farm equipment and waggons and such, and it had a safe too. 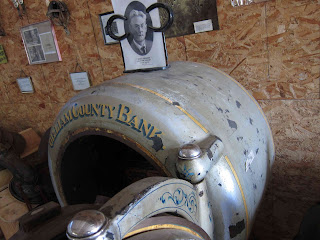 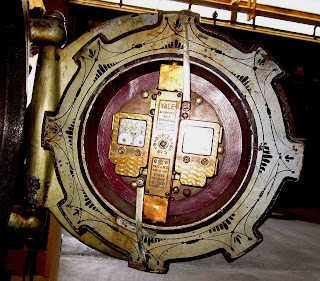 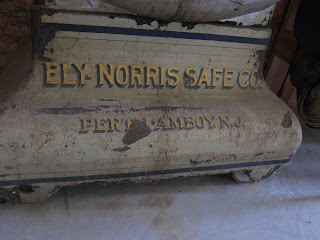 Another company I've not heard of: Ely-Norris of Perth Amboy, New Jersey. This dual timer cannonball (it's not really round, just rounded - can you call it a cannonball?) was a long way from home, but it kept the Gilliam County Bank's money secure for years. The little lettering inside the door says, "YALE automatic bolt operating device / DUPLEX No.3  / Patented June 23 1891 others pending". It has led a hard life, with rust on the exposed metal and some paint chips, but the door still swings easily and the timers may still work. Nobody wanted to close the door, with one safe already locked accidentally. 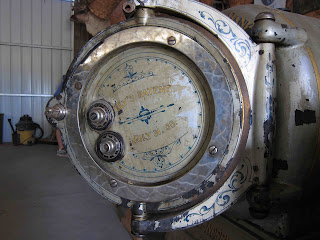 I liked the blue scrollies on the hinge, modeled with a second color of light blue, and the rakish way they had painted the front of the door at an angle. 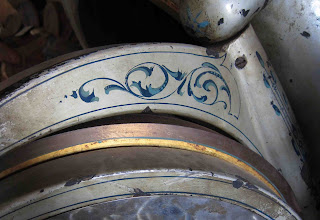 And looking closely at the lettering around the opening, again we see a 'dirty' area that crudely covers the lettering and the striping. So again it looks like the lettering and striping was put on with bronze paint, and then a clear varnish was put over for protection. Looking carefully at the front door you can see some very brushy 'holidays' where the varnisher missed an area - pretty easy to do with a clear, unless the lighting is just right. 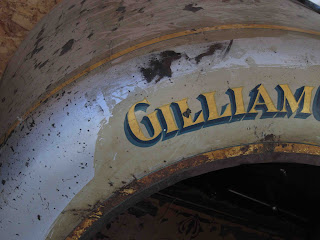 So if anybody out there has an idea about how to open that "pre-cracked" safe, I'm sure the people at the museum would be interested. I didn't get an e-mail address, their info (from Wikipedia) is:
Gilliam County Historical Society
Highway 19 at Burns Park
P.O. Box 377
Condon, Oregon, 97823
(503) 384-4233

I am glad I found this site. Spent a couple days at the Cinci Hist. Library searching much the same safe stuff. Great Building! I am in the safe cracking business and do a lot of historical research on safes including patents, especially cannonballs. Do you have better closeups of the Ely Norris door Yale timelocks and automatic. That is a rare one. Thanks Doug

Hi Doug,
I have only 2 photos of the Yale workings, but theyn are bigger than in the blog. I'll send them to you if I can figure out how - I don't see anything on your blogspot page.

Lee, my address is macslocks at gmail. I am posting some pictures of the more popular later version of the Yale timelock on Antique-Locks forum. Doug

Thanks for taking the time to discuss this, I feel strongly about it and love learning more on this topic. the heavier safe is the better it will